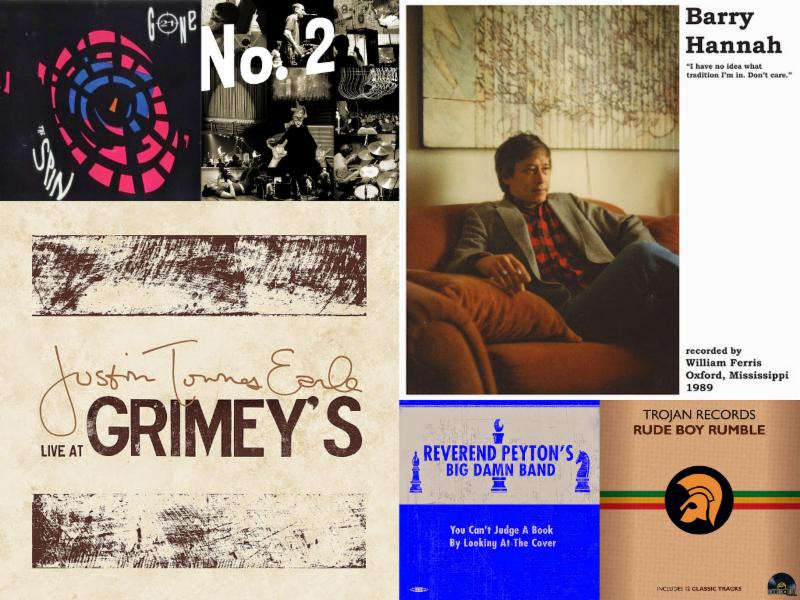 Record stores are doubling down, per usual, on their own holiday. Dozens of indie record stores are releasing their own special slabs of something to celebrate the forthcoming Record Store Day 2015, see that press release below.

AIMS members represent, of course, and then some, with heavy hitters like Jackpot Records’ No. 2 to Culture Clash’ 24 Gone, an evening with The End of All Music’s Barry Hannah release, a platter of select riddims from Vintage Vinyl’s Tom “Papa” Ray and Daddy Kool’s sweet Reverend Peyton’s Big Damn Band 7″.

There’s more treasure, as Shake It Records releases limited vinyl for hometown Wussy, 500 red vinyl copies of “Strawberry,” that won’t make it out of Cincinnati. Some store releases are so small, select and secretive, that writing about them in advance will only cause envy and jealousy for those out of range.

Personally, give me that “Trojan Records Rude Boy Rumble”, it will remind me of many nights sitting with Papa Ray, while he spins his records. I’m desperate for that Barry Hannah record, when I asked David Swider about the unusual release, I told him it reminded me of a beautiful night spent with the late author Larry Brown, in Oxford, MS, talking about favorite Southern authors, but mostly talking about Elvis Costello. David told me that Larry Brown will be the next release in his series. I want that one, too. Read more about this special record in the press release below and at the Oxford American.

Culture Clash Records‘ 24 Gone “The Spin” is a double dose of Northern WTF, a band hailing from Vancouver, British Columbia that Culture Clash‘s owner Pat was simply a fan of.

The LP was produced by Dave Ogilvie (Skinny Puppy, Marilyn Manson, Killing Joke) It was a tremendous regional hit due to Detroit/Windsor station 89 X. The CD was out of print so there was no way to get it. The station even played the album in its entirety so you could tape it.
This has long been one of my faves, so I was more than excited to release it.
The record is limited to 500 worldwide and it pressed on blue vinyl to compliment the restored cover art.

Daddy Kool‘s Reverend Peyton’s Big Damn Band 7″ “You Can’t Judge A Book By Looking at the Cover” isn’t just a regional favorite, but an AIMS favorite having hit tour stop in-stores at many of our stores.

The Reverend Peyton’s Big Damn Band has been creating a whirlwind with their riveting and unconventional elixir of muscular and high voltage country blues capped by gritty growling vocals and striking finger picking. Inspired by the likes of Charley Patton, Furry Lewis and John Hurt, Reverend Peyton is steeped in the great blues tradition but is catapulting its roots into a new era.

Jackpot Records’ release is the sleeper of the year. Check out the video. You want it.

Available for the first time ever on vinyl, No. 2 “No Memory” is the 1999 debut of short lived post-Heatmiser Portland, OR band: No. 2. This album is missing link between the end of Heatmiser and the beginning of Elliott Smith‘s major label debut. Fronted by Neil Gust, No. 2 continued the more carefully constructed and often heartbreaking take on pop that Heatmiser first explored as well as the dark, searching songwriting style that would soon be a calling card for former Heatmiser member Elliot Smith as he started his solo trek at the same time. This collection includes the original “No Memory” recordings remastered for 180 gram vinyl from the original tapes with eight previously unheard bonus tracks including four home-recorded demos. Mixed By Elliott Smith Guest appearance: Elliott Smith / Sam Coomes Liner notes by Thomas Beller Mastered by Tony Lash (Heatmiser) Limited to 1500 copies worldwide.

As you plan accordingly for this year’s events, happening world-wide on April 18th, 2015, please consider preparing for next year’s event. Record Store Day comes the third Saturday of every April, as these indie records have shown, with the right amount of planning and passion, any record can.