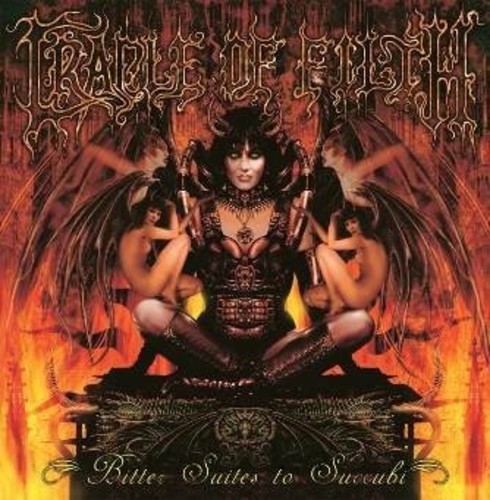 'Bitter Suites to Succubi' was Cradle of Filth's 2001 studio release, following on from the highly successful 'Midian' album released on Music For Nations in 2000, and further established the band's meteoric rise to the forefront of British metal in the early 2000's'Bitter Suites... ' contained original works such as the now fan-favourite 'Born in a Burial Gown', along with the band's trademark grandiose sweeping gothic instrumental passages, plus a selection of reworked tracks from Cradle of Filth's legendary debut, the ferocious 'The Principle of Evil Made Flesh'. Overall, this was a supreme example of high-calibre extreme blackened metal, accompanied by main man Dani Filth's accomplished lyrics and poetic narrative. The album was recorded at New Rising Studios, UK and was engineered & mixed by Doug Cook. Alongside vocalist Dani Filth, the band line-up notably featured Paul Allender (now of White Empress) on guitars, Adrian Erlandsson (of At the Gates & Paradise Lost fame) on drums, plus Martin Powell (formerly of My Dying Bride) on keys. Grammy-nominated Cradle Of Filth have been pioneers of extreme music since their debut in 1994 and have continued to evolve with each of their subsequent releases. Unafraid of ruffling a few feathers, the band have continually refused to bow to convention or to conform to prevalent trends and fads. Yet despite this uncompromising stance, the band are still the most successful British heavy metal band since Iron Maiden, with legions of fans around the globe. This mid-price CD edition of 'Bitter Suites to Succubi' is presented in jewel case packaging completed with a 12-page booklet and an OBI card.
back to top