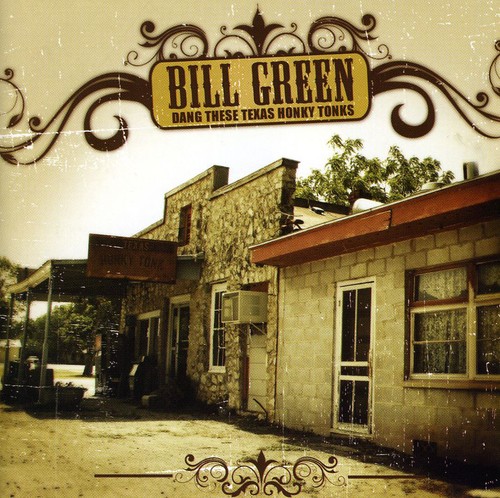 Bill Green has been involved in music all his life. At seven years old, he began playing guitar and piano until reaching high school when he put his music on hold to play football. Upon graduation from high school, Bill attended Texas Tech University and Sul Ross State on athletic scholarships, where he played three seasons of college football. In 1972, due to injuries, he gave up football and returned to music. Upon graduation from college in 1973, Bill re-examined his future and began pursuing his music career full time. From 1972-1982, Bill performed on the 'road' while making numerous trips to Nashville recording and writing. In 1976, Bill recorded his first Billboard Chart record, "Texas on a Saturday Night". From 1976 to 1982, Bill continued to record in Nashville, releasing other National Chart singles including "Fool Such as I", and "Texas Greats". In 1976 Bill went to work with the legendary Johnny Bush as bass player and front man until 1978, when he formed his own band, the Texas Greats, touring the Southwest U.S. and working with his friends John Wesley Ryles, Becky Hobbs, David Wills, Brian Collins, and Kenny Dale. In 1980, Bill formed the San Antonio based booking agency, Texas Greats Promotions, and handled booking duties for many local, regional, and national acts. In 1982, Bill left the "road" to spend more time with his family and concentrate on the business and studio production. It was at this time that he formed BGM records and his publishing company, Bill Green Music. As a songwriter and publisher, Bill has had songs recorded by Johnny Bush, Doug Kershaw, Toby Keith, Lantana, Kenny Dale, Billy O'Rourke, and many others, not to mention three of his own albums which included many of his own songs. Working in recording studios since the mid 70's, production has proven to be a successful venture for Bill, producing many great artists, including those mentioned above. In '85 and '86, he served two terms as a member of the State Board of Directors of the Texas Music Association, one term as President of the San Antonio Chapter, and was instrumental in the formation of the Texas Music Commission (now the Texas Music Office, a branch of the Governors Office). With over 25 years experience in performing and the music business, Bill is President of BGM Network, Inc., with offices and studios in San Antonio. Most of his time is spent in the Studio and administering the BGM publishing catalog, as well as occasionally performing a few 'gigs' here and there. Now, after almost 20 years Bill has found the urge to release a brand new album, 'Dang These Texas Honky Tonks.' We Hope you like it!
This website uses cookies to personalize content and analyse traffic in order to offer you a better experience.
I accept Learn More
back to top