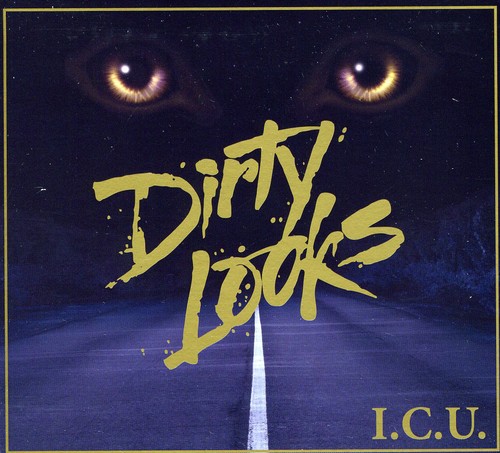 Perhaps their heaviest and most diverse album to date, and their best album in the last decade, Dirty Looks charters new territory on their 2010 studio album I.C.U. This album shows the work of a revitalized band that was poised for a comeback, when unfortunately their world was turned upside down when bassist Greg Pianka was killed in a bar fight shortly after he finished laying down his bass tracks. The band, devastated, forged foreward to finish the album in Greg's honor and wanted it released asap to commemorate what would be his last work. I.C.U. shows the workhorse mentality of a newly formed, dedicated and hungry young band paired with the classic AC/DC vocal stylings of frontman, Henrik Ostergaard, who brought the band to the dance more than once. While the listener gets what they have come to expect, a classic Dirty Looks sound, they also get something new - a young, hungry, solid band that tweaked the album into a heavy but melodic piece of hard rock history. With up-and-coming producer, Mikhail Pivovarov, at the helms...Dirty Looks was able to tred into new territory as well. The album, while still a very hard rock album, features a couple of surprises. Showing the bands growth, you have the band and producer experimenting with a mixture of violin, cello, piano, and strings on 'Only Friend'. The other surprises on this album are the three cover tracks: Happy Together (The Turtles), Spirit In The Sky (Norman Greenbaum), and Down Payment Blues (AC/DC). It's surprising to see the band cover an AC/DC tune, when for so many years they tried to shed the often made comparisons to one of Heavy Metals Dynasties. FnA Records releases this long-awaited new studio album with a limited edition digi-pak pressing printed with Metallic Gold Ink (limited to the first 1,500). Band bio: They just wanted to rock! So when Erie, Pennsylvania cover band Crossfire called it a day, Danish born vocalist/guitarist, Henrik Ostergaard, and fellow Crossfire bassist Jimmy Chartley packed up and headed to the west coast (San Francisco to be exact)...and Dirty Looks was born. With a small self-titled ep already under their belt, Dirty Looks would release it's first full length album of the same name in 1984 on Sticky Records. Axe Killer Records (France) would pick up this album a year later and give it a bigger production. Meanwhile, back in the states, bands like Quiet Riot, Motley Crue, and Ratt were putting a very public face on hard rock music. So it was really no wonder why local radio stations were spinning Dirty Looks, especially with the lofty comparisons to Bon Scott and AC/DC. However, trials and tribulations would eventually cause the band to break-up and head back to Pennsylvania. Dirty Looks would eventually regroup with the addition of bassist Jack Pyers. The band with the core duo of Henrik and Jack would then release two more independently produced albums in the next two years. 1986 saw the release of INYOURFACE which garnered a lot of airplay on the reputable Z-Rock. Dirty Looks stock was rising! Then in 1987, the band forged forward with the release of their third full length album, I Want More...and more is what the band would get. The Major labels started calling: EMI, Elecktra, Chrysallis, and Atlantic all put in their bids; and Atlantic won.....and the rest is history as they would say. Dirty Looks saw MTV Airplay, worldwide tours, major recording budgets, and an era that ushered Hard Rock/Heavy Metal into the mainstream. In 2009, FnA Records (www.fnarecords.net) found itself in the fortunate position to release three uber-rare gems on CD for the first time ever...and to a worldwide audience. Make sure you pick up remastered versions of the first 3 indie Dirty Looks CD's: Dirty Looks - Dirty Looks w/ 1984 EP, In Your Face, and I Want More.
This website uses cookies to personalize content and analyse traffic in order to offer you a better experience.
I accept Learn More
back to top