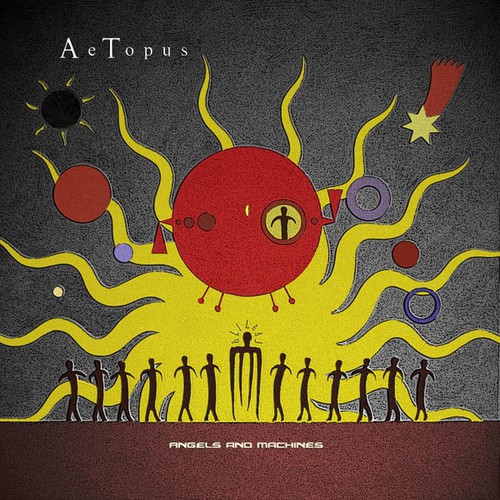 Composer Bryan Tewell Hughes deftly combines ethereal electronics with organic and acoustic elements to create lush, complex pieces that expand the imagination and fill the aural palette. Since he began recording as AeTopus in 2002, he has created music and sound that elaborates on the grey area between New Age, Dark Ambient, and Gothic styles. As a musician and audio craftsman, Hughes' skill and attention to detail are attention-grabbing and unique. Each AeTopus album is a flowing, thematic work of sonic art wherein universal concepts emerge, illustrated with a hybrid of orchestral ambience and tribal flavors. Angels and Machines (2013) is a specialty EP borne of dark, subtle imagery from the vaults. Included is a remix of 2002's Reflecting in the Glass (originally from Memories of the Elder), and a guest appearance by Seattle vocalist and stage performer Vivian Lee. Mixed by Bill Simpkins of Alpenglow Sound Studios and mastered by Alex DeGrace of Suite Sound Labs, Angels and Machines is also a technical masterpiece worthy of intimate audiophile scrutiny. * * * Bryan Tewell Hughes began taking piano lessons at age 6, and immersed himself in visual arts and amateur filmmaking as a young man. His passion for science fiction and fantasy films and their soundtracks would later help set the tone for his musical pursuits, and a fascination with the ideas of abstract expressionist painting would be translated into the world of sound. Hughes credits his grandparents for introducing him to Electronic music in the 1980's, and names Kitaro, Ray Lynch, and Tangerine Dream as some of his early influences. A former tattoo artist, he holds degrees in Fine Arts and Psychology. During the 1990's, Hughes played bass guitar in blues, Reggae, funk, and punk bands in the Pacific Northwest before settling into a more experimental, studio-based identity. After releasing a solo Industrial album, AnthroPile: Take in 1999, he revisited his more contemplative musical roots and embarked on AeTopus - a project that he has remained passionate about to this day. He currently works out of his Bellingham, Washington studio.
This website uses cookies to personalize content and analyse traffic in order to offer you a better experience.
I accept Learn More
back to top