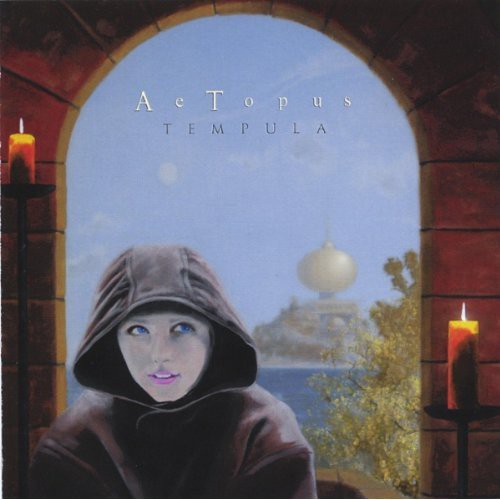 Composer Bryan Tewell Hughes deftly combines ethereal electronica with organic/acoustic elements, resulting in a progression of lush, complex pieces that expand the imagination and fill the aural palette. As a composer, musician, and audio craftsman, Hughes' skill and attention to detail are attention-grabbing and unique. Moreover, his albums are not mere collections of individual songs - they are flowing, thematic works of art. Universal concepts emerge, albeit gently enough to avoid the "spoon-feeding" dreaded by sophisticated listeners. Tempula (2006) is the second AeTopus album to be released by Bryan's label, 12Ton Productions. It explores the inner workings of human spiritual activity, yet refrains from identifying specific belief systems or making judgments. Listened to in it's entirety, it is a complete set of thoughts regarding why, where, how, and when humans interact - or seem to interact - with a world they cannot physically grasp. Electronics, percussion, and acoustic instrumentation are interwoven across a broad canvas of musical inspiration, resulting in a world that feels medieval, eastern, gothic, and contemporary - sometimes all in one earful. * * * Bryan Tewell Hughes offers his inspiration to the world on compact discs, but he does not consider himself a proper "musician". He began classical piano training at age 6 and continued for 10 years, reaching a surprising level of ability - yet virtuosity of this and other instruments were never fully realized. A decade-long stint as a raucous, heavy-handed bass player included appearances in several Pacific Northwest bands such as the funky power trio Shaky Kane (1992-94) and wisecracking punk outfit Wiseacre (1996-98). This was all good, loud fun, to be sure - but obviously as much a social outlet as a creative one. By the late 1990's, it became apparent that the days of relying on band members for artistic expression were coming to a close. Times were changing, and computer-based recording technology was beginning to achieve an impressive combination of capability and affordability. As he began to assemble his personal studio, Bryan became one of the first musicians to produce quality recordings in small, computer-centric project studio environments (though professional work at Binary Recording Studio in Bellingham, Washington later encouraged him to learn all aspects of the craft). There is, however, a relevant non-musical history to be told. A bottomless pit of creativity, Bryan was disciplined constantly in grade school for producing elaborate, fantastic drawings instead of participating in classroom activities. His fascination with amateur Super-8mm filmmaking as a teenager resulted in endless hours of storyboarding, set-building, location planning, and torturing hapless friend-actors through weekend shooting sessions. In college, a studio emphasis in Fine Arts provided a formal foundation from which to explore the visual arts, specifically drawing and oil painting. A three-year odyssey as a tattoo studio co-owner provided color to the mid 1990's and, more recently, a second degree in Psychology has offered a valuable glimpse into human development, behavior, and culture. Bryan's underlying preference for ambient, mood-generating, wordless music has been constant since the 1980's. As far back as his teenage years, Electronic pioneers such as Kitaro, Ray Lynch, and Tangerine Dream have unwittingly juxtaposed a surreal soundtrack against a life filled with variance - voices of calm, contemplation, and mystery amidst a sea of grandstanding and adventure. The culmination of these many exposures is AeTopus - a world where music is only the tip of an iceberg composed of ideas, images, and observations. Each album is an art gallery, an essay, a statement about humanity that the listener must coax from a dynamic tapestry of sound. Proper musician or not, Bryan has found his medium...
This website uses cookies to personalize content and analyse traffic in order to offer you a better experience.
I accept Learn More
back to top