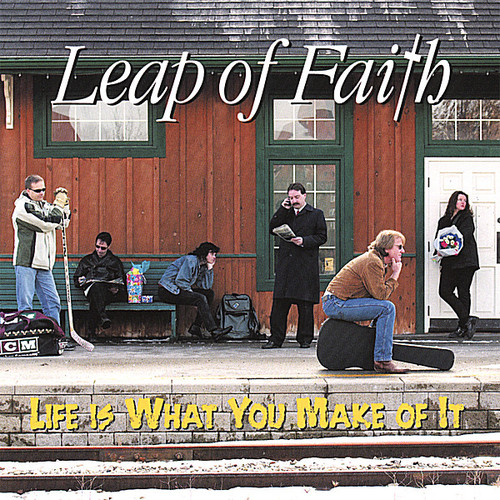 Life Is What You Make of It
Artist: Leap Of Faith
Format: CD
New: Not in stock
Wish

Leap of Faith A Biography Leap of Faith is a Christian band with a country music flavour. The band was formed by Al Kehn, at the time a Lutheran pastor in Kitchener, around 1994. Joining Al was his sister, pianist Carolyn Beaton, guitarist Jamie Mayer and others who came and went over the next few years. Al met singer Georgina Johnston through a mutual friend, and the core of the group was solidified. Leap of Faith played many concerts in the next few years at area churches in the Kitchener-Waterloo area, the World Youth Festival, the International Plowing Match and more. In 2001 drummer Ralph Boegli joined the group along with bassist Chris Riding and the band recorded and released their first CD entitled, "Life is What You Make of It". In 2005 the band released their second CD, "Power to Choose" and continued playing area churches and festivals while receiving airplay on local Christian radio stations. Leap of Faith writes and performs their own original music. Chief songwriter Al Kehn writes a variety of songs based on his ministry and life experiences and each song is from a different genre. Carolyn Beaton and Jamie Mayer also contribute with songs they have co-wrote. As a result Leap of Faith performs songs the average person can relate to. In 2006, Ralph and Chris left Leap of Faith and long-time musical talent Peter Polfus joined the group as their new drummer. A Christmas CD was released on December 2, 2006 as the group performed at the Church Theatre in St. Jacob's, Ontario. Leap of Faith now turns it attention to 2007 and new songs, new opportunities to perform live and gain new fans.