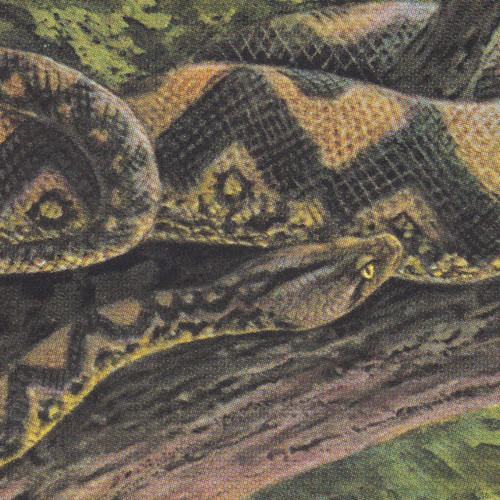 Following a still-ongoing series of reissues of the earliest, previously tape-only releases from Dominick Fernow's Rainforest Spiritual Enslavement, this long-in-the-making new album proper is an epic 80-minute set featuring additional production and "sound on sound processing" from Silent Servant, a remix from Substance, and mastering by Paul Corley. It's by far the most ambitious and far-reaching Rainforest dispatch, taking that artificial, tropical humidity as a starting point before heading deep into a kind of textured ambience that are reminiscent of everything from Talk Talk's Laughing Stock (1991) to Carl Craig's "How The West Was Won" (1996), from Huerco S to classic Chain Reaction. Ambient Black Magic moves away from the extreme saturation of those early cassettes and the industrial environmentalism of his previous album Green Graves (2016) and is described by the label as "Fear Dub" - which is essentially the perfect encapsulation of the deep sense of paranoia contained within. The opening "Jungle Is A Shapeshifter" is a gargantuan 35-minute head-melter that's split across the first two sides of the vinyl pressing. Co-produced with Silent Servant, it's an absorbing piece of electronic music - slowly unfurling via chorus pedal guitars that gradually degrade, while a fathoms-deep bass pulse and tape-delay gives the piece it's shape. It's like an updated, tranquilized, fever-dream variant of the kind of ambient dub Vainqueur made his own back in the mid-90s. "Beyond The Yellow-Spotted Bamboo", another Silent Servant co-production, clocks in at a relatively modest 17 minutes and heads off into more open terrain, this time with submerged percussion providing some propulsion, while shards of colored synth pull you back into the swamp. It's another humid, breathtaking session - bringing out the best in both Fernow and Silent Servant. "Praying Mantis Black Arts" is another masterclass in sub-bass construction, while "Chile's Crimson Tide" is the shortest track on the album, a kind of broken coda before Substance ends the set with a remix of "Beyond The Yellow-Spotted Bamboo", deploying a tribal reduction that references classic Chain Reaction from a producer who was part of it first-hand. It's a relatively upbeat conclusion to one of the most immersive listening experiences you'll have in 2017; those of you looking for escape should dive in - you won't want to re-engage with the world around you for a while. RIYL: Vainqueur, Huerco S, Talk Talk, Carl Craig.
This website uses cookies to personalize content and analyse traffic in order to offer you a better experience.
I accept Learn More
back to top