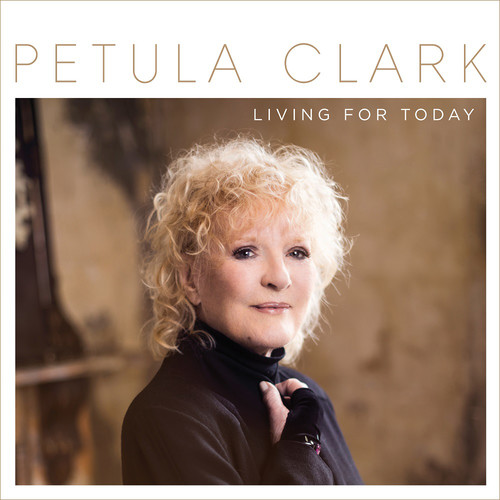 At the age of 84 Petula Clark is most definitely living for today. In fact, that's the title of her new album. "It's simple - I love it," Clark tells Billboard about her enduring musical career and new album Living For Today the title track and bonus track "The Rainbow". In an incredible career spanning over seven decades Petula Clark is a legend and a true international superstar. On her new album 'Living For Today', Petula Clark states: Â« This is a collection of songs that I SO enjoyed recording - most of them in London. The Hut (which I affectionately call the "Wendy House" studio) is small and unusually delightful, nestling at the bottom of John Owen Williams' typically English garden. John, along with Paul Visser, worked hard on all the UK tracks - fuelled with good old English humour, yummy snacks, and copious cups of tea. Luverly!! Â». These tracks include: 'Miracle To Me', one of her own compositions, written in the French mountains, embellished later by her writing on her piano, and a cover of The Beatles' 'Blackbird' to which she gives a very different pair of wings. She also flirts with other genres, like in the country swing of 'Endgame', and in the subtle dance music sensibilities of 'Sincerely'. There are other covers on the record too, all tackled in searching new ways. Clark was nervous about recording Peggy Lee's 'Fever' - they met years ago, and even sang together on one of Petula's TV specials - but here, the song gains an interesting and sly rocky edge. Steve Winwood's 'While You See A Chance' also gains a choir, created quite by accident by the people working in the studio. Â« I love how that happened: organically, naturally. It's how the music should be - from the heart, and straight out. Â» Her newest recordings 'Living For Today' and 'The Rainbow' have different backgrounds. 'The Rainbow' is Petula's first songwriting collaboration in many years with Tony Hatch - who wrote 'Downtown' and many other hits for her: Â« Tony Hatch and I wrote 'The Rainbow' in his lovely house in Minorca, off the coast of Spain. I couldn't get into the studio right away - but eventually started recording it in New Jersey and then in New York. However, the all important final work was completed in David Hadzis' splendid studio in Geneva (Switzerland). Â» As for the title track of the album 'Living For Today', Petula co-wrote it with her musical director Grant Sturiale. Â« We had a lot of fun doing 'Living for Today', at first in Grant's music room in Manhattan - then in Joe Baker's terrific - if somewhat chaotic - New York studio. (Coffee and donuts essential). Petula concludes: So - you see - this is a well-travelled selection of songs that I hope YOU will enjoy wherever YOU are. "I grew up with music right from when I was a kid. I was singing from a very early age; In fact, the first time I sang in front of an audience it was in front of a congregation in Wales, and I guess I was hooked from there on. There are very few things that have that sort of kick, so I'm happy to still be doing it." Living For Today, which comes out early 2018, will include her first U.S. concert tour in more than five decades to support the album.
back to top