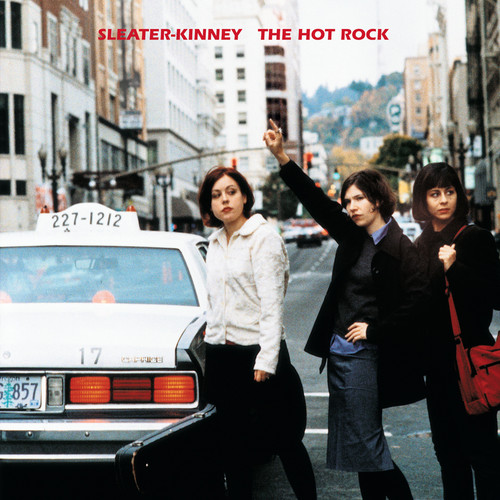 Expectations for Sleater-Kinney's fourth album were stratospheric, with the raging, tuneful feminist catharsis of Call the Doctor and Dig Me Out having garnered near-universal critical raves and outlandish media hype. Afraid of falling into a predictable rut, though, the band bravely pushed its range of expression into more personal, subdued, and cerebral territory on The Hot Rock. That means the record isn't quite as immediately satisfying as its two brilliant predecessors, but it does reward those willing to spend time absorbing its nervy introspection and moodiness. Corin Tucker and Carrie Brownstein push relentlessly for more complex interplay, both in their vocal and instrumental work; even the gentlest songs might break into unexpected dissonance or take an angular, off-kilter melodic direction. As such, there's never an obvious, gut-level anthem that jumps out at the listener in the manner of an "I Wanna Be Your Joey Ramone" or "Words and Guitar," but the intensity simmering under the surface does bubble over often, thanks to the group's greater use of dynamic shifts. There are fewer protest songs this time around, as most of the lyrics explore failed relationships and personal uncertainty, yet it manages to retain the sense of empowering catharsis that makes the group so compelling. The Hot Rock can invite comparisons to a less jam-oriented Television or a minimalist version of indie compatriots Helium (not to mention the obvious Kim Gordon homage on "Get Up"), but in the end, it stands on its own as Sleater-Kinney's most progressive and experimental work, as well as their darkest.