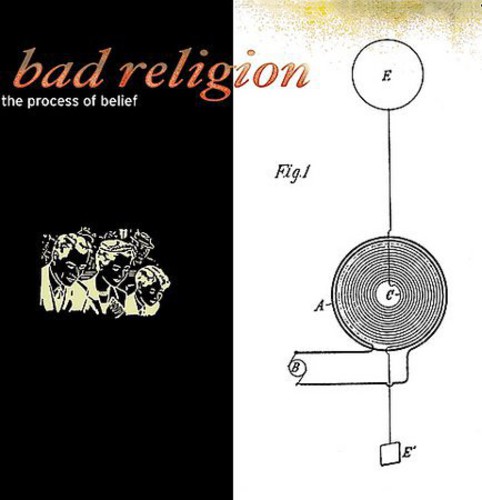 ''The Process of Belief'' is the twelfth studio album by the American punk rock band Bad Religion. It was produced by its leaders Greg Graffin and Brett Gurewitz, and was released on January 22, 2002 through Epitaph Records. After touring in support of its previous full-length studio album, ''The New America'' (2000), Gurewitz rejoined Bad Religion in 2001 after a seven year hiatus. The band resigned with Epitaph, and then began work on its first album for the label in over eight years. The album also marked the first album to feature Brooks Wackerman, who replaced former drummer Bobby Schayer.

''The Process of Belief'' was another huge success (debuting at #49 on the Billboard 200 chart) and it was well received by both critics and fans. The album has sold more than 220,000 units worldwide. ''The Process of Belief'' features one of Bad Religion's well-known songs "Sorrow", the band's first to chart in the US in six years, since "A Walk" (from 1996's ''The Gray Race''). "Broken", "The Defense" and "Supersonic" also received radio airplay, but all failed to make any national chart (although "Broken" reached #125 on the UK Singles Chart).

The album marked the return of Bad Religion's punk rock roots, and many have compared it favorably to their past releases, including their 1989 classic ''No Control'' and 1992 album ''Generator''. - Wikipedia

It was fine news in 2000 that record mogul and guitarist/co-songwriter Brett Gurewitzhad buried the bitter hatchet he shared with his ex-Bad Religion mates, contributinga song to that year’s The New America. And it was the best news ofall soon thereafter that he’d ultimately coaxed his former band back intohis Epitaph stable, where they always belonged, and had rejoined the group, andregained the producer’s chair to boot.

Like Michael Jordan joining the Wizards, Gurewitz’s presence and contributionshave clearly galvanized the band on The Process of Belief. With him backin the fold, singer/leader Greg Graffin need only compose seven ace songs insteadof 14 like the last three Gurewitz-less LPs. A higher quality control resultsfrom this economy, as well as the rediscovered complement of Gurewitz’s searingtunes (“Supersonic”) with Graffin’s recognizable pop hooks (“KyotoNow”).

One also notes the lustrous sound of Gurewitz’s backing vocals, once againmeshed with Graffin’s in the kind of familiar near-perfection that has alwaysbeen the hallmark of the best harmony teams, like The Everly Brothers, The Beatlesand Simon & Garfunkel.

And once one gets used to the late ‘80s feel, and chalks it up to a pardonableretrench, there isn’t a bad moment in The Process’s 37 minutes.As soon as one “supersonic” hook subsides, another like the frantic,frenetic, kinetic “Prove It” relieves it. Graffin still possesses thefinest set of pipes in a quarter century of L.A. punk, and the three-guitar assaultof Gurewitz, Greg Hetson, and Brian Baker is the sort of non-stop wall-of-fusilladethat brings to mind 1978-1980 Ramones, Clash, or Buzzcocks concerts. Meanwhile,chugging bassist Jay Bentley seems to have gotten a hotfoot playing with rabbit-quicknew drummer Brooks Wackerman. While the latter can’t quite match the boomingchops of the retired-to-injury Bobby Schayer, he is just as fluid on the fastesttempos, and contributes fat beats to the other third of the record that’smore akin to the band’s more measured 1992-2000 work.

See for yourself—the genre and its ideas and ideals aren’t dead. Theold dog didn’t need any new tricks, it just needed to race like a real greyhoundagain.