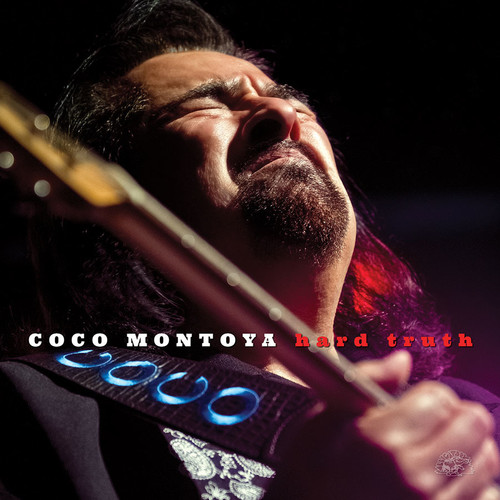 The old Willie Dixon adage, “blues is truth,” perfectly describes the searing, passionate contemporary blues-rock of world-renowned guitarist and vocalist Coco Montoya. Taught by the “Master of the Telecaster,” Albert Collins, but with a hard-edged sound and style all his own, Montoya mixes his forceful, melodic guitar playing and passionate vocals with memorable songs, delivering the blues’ hardest truths. He earned his status as a master guitarist and soul-powered vocalist through years paying his dues as a sideman with Collins (first as a drummer) and then with John Mayall’s Blues Breakers, before launching his solo career in 1993. Five years of constant touring with Collins and 10 years with Mayall turned him into a monster player and dynamic performer. Montoya has released eight solo albums – including three for Alligator between 2000 and 2007 – and has played at clubs, concert halls and major festivals all over the world. Returning to Alligator with his new album, Hard Truth, Montoya delivers 11 career-topping performances, the music immediately ranking among the best he’s ever recorded. Produced by drummer Tony Braunagel (Eric Burdon, Curtis Salgado, Taj Mahal, Bonnie Raitt), the album features 11 songs, each delivering a hard truth of its own. From the radio-friendly, gospel-inspired shout-out to love, I Want To Shout About It, to the haunting Devil Don’t Sleep to the icy-hot cover of Albert Collins’ The Moon Is Full, Hard Truth covers a lot of emotional ground. Montoya’s unpredictable guitar playing and smoking soul vocals blend effortlessly with a backing band featuring renowned musicians including bassist Bob Glaub (Bob Dylan, Bruce Springsteen, Jerry Lee Lewis), keyboardist Mike Finnigan (Jimi Hendrix, Etta James, Taj Mahal), guitarists Billy Watts (Eric Burdon) and Johnny Lee Schell (Bonnie Raitt), and Braunagel on drums. Slide guitar master Leroy Parnell guests on Lost In The Bottle. Henry “Coco” Montoya was born in Santa Monica, California on October 2, 1951 and raised in a working class family. Growing up, Coco immersed himself in his parents’ record collection. He listened to big band jazz, salsa, doo-wop and rock ‘n’ roll. His first love was drums; he acquired a kit at age 11 and was playing in a number of area rock bands while still in his teens, eventually becoming an in-demand drummer. Fate led him towards the blues, first as a drummer for Albert Collins, then as the blues legend's second guitarist. After coming off a number of years on the road with Collins, Coco hooked up with British blues king John Mayall and was a ten-year Blues Breaker. A solo career followed, with three fine releases on Blind Pig Records. In 2000, Coco’s Alligator debut, Suspicion, quickly became the best-selling album of his career. With regular radio airplay on over 120 stations nationwide, Montoya’s fan base exploded. After two more highly successful Alligator releases -- 2002’s massively popular Can’t Look Back and 2007’s Dirty Deal – Montoya signed with Ruf records, cutting both a live and studio album. Montoya will hit the highway in support of the new release, playing his heart out night after night for fans hungry for the real thing. Still an indefatigable road warrior, Montoya continues to pack clubs and theaters around the world, and brings festival audiences to their feet from New York to New Orleans to Chicago to San Francisco. Across the globe, he’s performed in countries including Australia, Belgium, Finland, Switzerland, Germany, Norway, England and Canada. Vintage Guitar says, “Coco just keeps getting better and better. Rockin’ blues with guitar that cuts straight to the heart of the matter. His guitar playing is funky and blistering. It’s perfect. Whatever he plays, he does it with fire and passion rarely seen in this day and age.”